Verity! Episode 6 – All Seven and We Watch Ace Fall 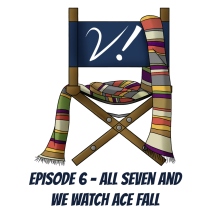 It’s official! We have finally made our way back to the classic series. This week Deb, Erika, Liz, and Lynne discuss the virtues (and possible lack thereof–though not according to Liz) of The Curse of Fenric. It’s new to Deb, it might as well be new to Erika, and it’s clear Liz and Lynne have seen it a few times.  Just a few…