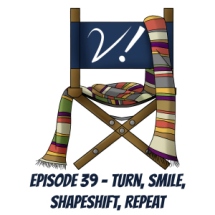 This week we cover what are some of the trickiest of the villains the Doctor has faced (one who even wears his face)! Join Deb, Erika, Liz, and Lynne as we try to stay on topic talking about shapeshifters. What is it about them that’s scary? Do they hold the same appeal for all of us? Is a talking cactus a more or less believable shapeshifter than a mostly-non-functioning robot?

Also covered:
Liz discovers what might be the most useless Dalek tat ever!
Erika tells Macworld magazine how to create your own podcast!
Lynne must have K-9 slippers!
Deb is (saddened, but also) gladdened by the warmth of the Doctor Who fan community after the passing of Kate O’Mara, Derek Martinus, and Glyn Jones.