Extra! – In Defence Of… Science! 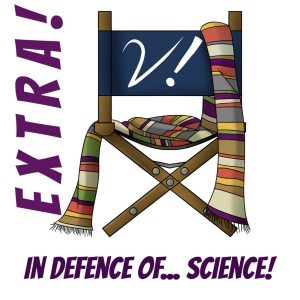 If you thought our previous installments of In Defense Of went off the rails, you ain’t heard nothin’ yet! Join Deb Erika, Katrina, and Liz as we do our best(?) to defend some of the dodgy science (and non-science) of Doctor Who. It’s about as nonsensical as you might expect.

And be sure to enter to win a copy of The Scientific Secrets of Doctor Who. Remember, if you’re already a Verity! patron, you’re automatically entered! If not, leave a comment over on the giveaway post, or become a patron before the contest ends on June 24th.

As for the comments here, please take a crack at defending all that “science”–or just laugh at our pitiable attempts.

Verity! Giveaway! – The Scientific Secrets of Doctor Who