Episode 238 – The Time of Angels/Flesh and Stoned 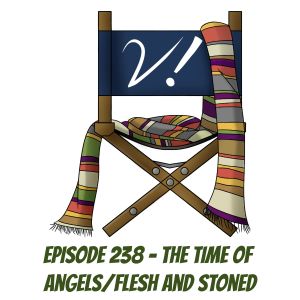 This episode covers “The Time of Angels” and “Flesh and Stone”. Join Deb, Katrina, and Lynne as they chat about these two generally lauded episodes.

Have you rewatched this story recently? If so, what did you think, and how did that compare with how you felt about it in the first place? Drop us a tweet or let us know in the comments!

Extra-special thanks to this week’s editor, Steven Schapansky of Castria!
Support Verity! on Patreon

Ep 100 – The Husbands of River Song that Never Ends

Huzzah and hurrah! We’ve reached 100 (numbered) episodes! Plus, it’s our three-year anniversary! What a lovely Christmas present. Join Deb, Erika, Liz, and Tansy as we celebrate this big, round milestone and talk about River, River, River and her delightful chemistry with Peter Capaldi. And as ever, we digress and touch on stuff like casting decisions, Philip Hinchcliffe, and Star Wars.

Don’t forget to enter our 100 ep/3-year anniversary giveaway by leaving a comment over on the giveaway post! But if you’re one of our Patreon supporters, you’re entered automatically! (And as always, THANK YOU!)

How did you like “The Husbands of River Song”? Was it a fitting send-off for a great character? Did it leave you wanting? Do you think we’ll see River again? Would you even want that? Let us know in the comments!

Bonus links:
Lazy Doctor Who
The Memory Cheats
It Was Alright In the…
Radio Free Skaro #508